Travel Advice with a Travel Advisory overview from the US State Department. Here we cover Visa, Safety & Security, local Laws and Insurance within our Angola Traveler Information guide.

At AARDY we can’t recommend travel insurance enough. Whether you are just traveling a few hundred miles from home to see family, or traveling to the other side of the world, travel insurance should be considered an essential part of your holiday packing. The hope is that you won’t have to use your travel insurance, and that you’ll have a fun and enjoyable trip. The following Angola Traveler Information should help you make the most of your trip to Angola. 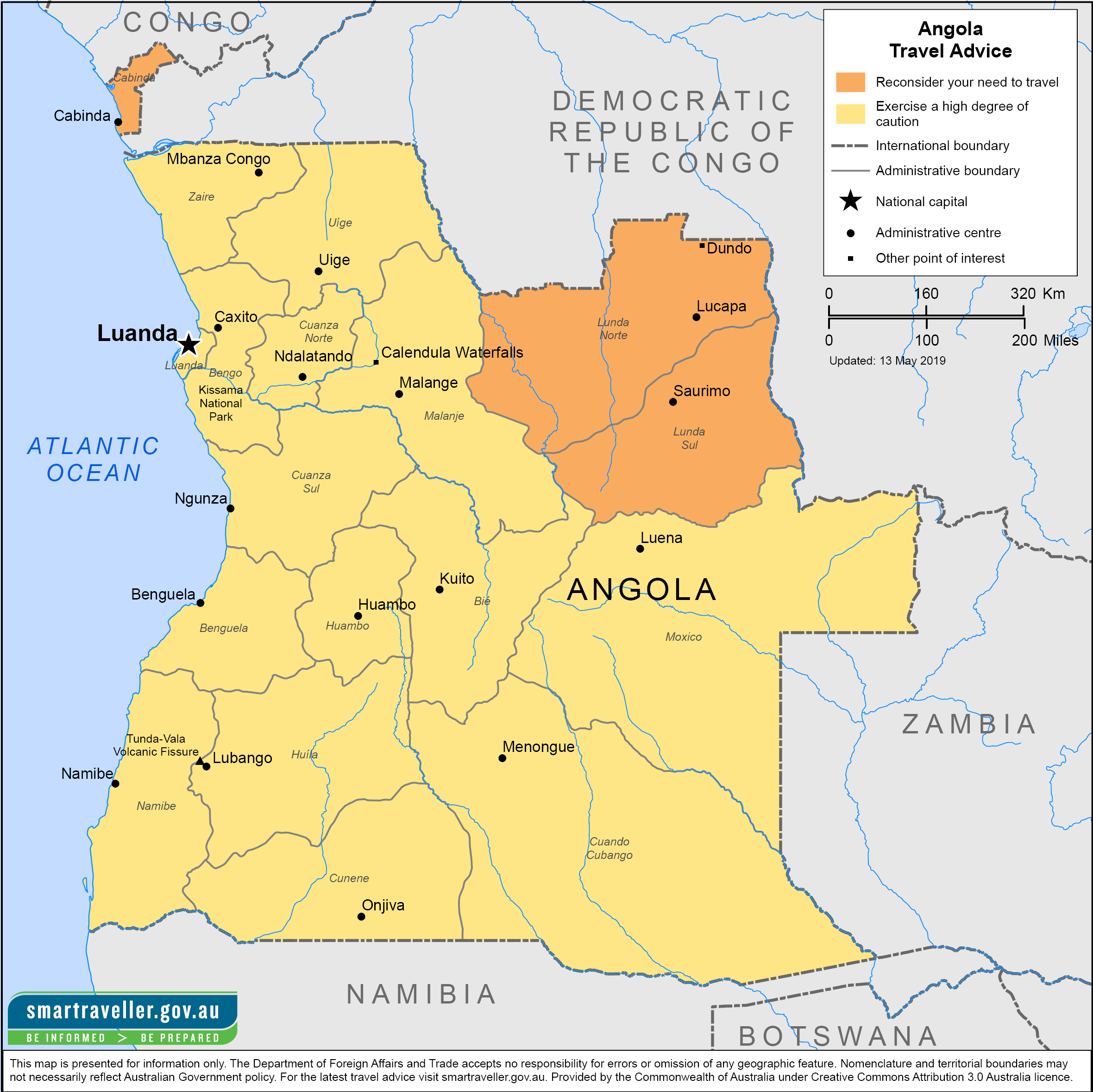 See our Fact Sheet on Angola for information on U.S. - Angola relations.

Foreign workers in Angola must arrive with a work visa and must keep the visa current. Doing otherwise risks fines and arrest.

Arrange reliable and secure ground transportation from the airport in advance.

Immigration and customs officials at the airport have detained foreigners without cause and demanded gratuities before allowing them to enter or depart Angola. If harassed at a port of entry, ask to speak with the U.S. Embassy or Airport Supervisor.

**HIV/AIDS restrictions: **The U.S. Department of State is unaware of any HIV/AIDS entry restrictions for visitors to or foreign residents of Angola.

Find information on dual nationality, prevention of international child abduction and customs regulations on our websites.

Landmines are a risk throughout the country outside major cities.

Cabinda City: Murders, kidnappings, and sexual assaults targeting foreigners have occurred in years past. While a heavy security presence now remains in the region, militant groups have indicated their intention to continue to conduct attacks on foreigners and occasionally attack police and Angolan Armed Forces convoys and outposts.

Lunda North and South: These diamond-producing provinces have the potential for civil unrest and crime. There have been reports of violent incidents against foreigners who require official permission and documentation from the government of Angola to travel there. Failure to meet these requirements may result in detention.

**Crime: **Armed assailants have killed some victims of muggings, robberies, and car-jackings which occur frequently in all areas of the country. Two Portuguese citizens were murdered in Viana in 2016 and kidnappers held several foreigners near Luanda. Armed assailants stormed a bakery stealing money, and an armed group raided a police station releasing prisoners and shooting two officers. Vehicle thefts, purse snatching, and theft from vehicles occur in areas frequented by foreigners.

See the Department of State and the FBI pages for information on scams.

**Victims of Crime: **The local equivalent to the “911” emergency line in Angola for police is 113; for firefighters: 115, and for ambulance services: 112. Emergency numbers listed may not have an English-speaking operator available.

Local authorities are responsible for investigating and prosecuting crime.

Due to the prevalence of HIV/AIDS, victims of violent crime, especially rape, are strongly encouraged to seek immediate medical assistance.

See our webpage on help for U.S. victims of crime overseas.

**Tourism: **The tourism industry is unevenly regulated, and safety inspections for equipment and facilities do not commonly occur. Hazardous areas/activities are not always identified with appropriate signage, and staff may not be trained or certified either by the host government or by recognized authorities in the field. Tourists are considered to be participating in activities at their own risk. Emergency response and subsequent appropriate medical treatment is not widely available in-country. U.S. citizens are encouraged to purchase medical evacuation insurance. See our webpage for more information on insurance providers for overseas coverage.

Criminal Penalties: You are subject to local laws. If you violate local laws, even unknowingly, you may be expelled, arrested, or imprisoned. You may be taken in for questioning by the police if unable to produce an acceptable form of identification or passport. Convictions for possessing, using, or trafficking in illegal drugs result in long prison sentences and heavy fines. Furthermore, some laws are also prosecutable in the U.S., regardless of local law. For examples, see our website on crimes against minors abroad and the Department of Justice website.

Photography: It is illegal to take pictures or use binoculars, maps, or GPS near government buildings, military installations, and key infrastructure. You could be fined, have your photographic equipment confiscated, and risk detention and arrest. Do not take photos of people without their permission.

Libel Laws/Slander: Disrespecting government officials is illegal and can lead to expulsion from the country. Angolan authorities confiscated the U.S. passports of a family for several weeks after they complained to immigration officials about the time it took to process their visas and passports at the airport.

**Arrest Notification: **If you are arrested or detained, ask police or prison officials to notify the U.S. Embassy immediately. See our webpage for further information.

Phone Service: Cellular phones are the norm, as landlines are non-existent. It is possible to purchase a SIM card locally and use a U.S.-compatible cell phone. The major cellular providers are Angola Telecom and Unitel.

**Currency: **The kwanza (AOA) is the official currency though U.S. dollars are accepted. Bills should be new and unblemished. ATMs dispense kwanzas only but frequently malfunction or run out of cash. Credit cards are accepted in a limited number of hotels and restaurants.

**LGBTI Travelers: **There are no legal restrictions on same-sex sexual relations or the organization of LGBTI events in Angola, although it is not socially acceptable. Same-sex couples have been harassed.

See our LGBTI Travel Information page and section 6 of our Human Rights report for further details.

Travelers Who Require Accessibility Assistance: Major hotels have ramps. Persons with disabilities face limited access to transportation, public buildings, hotels, and communication accommodations. There are few sidewalks and no curb-cuts, and most buildings lack elevators.

Women Travelers:Statistics on prosecutions for violence against women are not available. Most rape cases are not prosecuted. Domestic violence counseling centers, shelters, and various treatment centers and free legal assistance are available to abused women.

Medical facilities and services, including emergency care, are limited outside of Luanda and do not meet U.S. standards. In the capital some private clinics offer international standard medical care and 24 hour emergency services including ambulances. Local pharmacies provide a limited supply of medications.

**We do not pay medical bills. **Be aware that U.S. Medicare does not apply overseas.

Always carry prescription medication in original packaging with your doctor’s prescription. Bring preventative and over-the-counter medicines. Check with the Embassy of Angola to verify your medications are legal before you travel.

Consult the CDC website for Angola prior to travel.

The following diseases are prevalent:

**Vaccinations: **Be up-to-date on all vaccinations recommended by the U.S. Centers for Disease Control and Prevention.

Road Conditions and Safety: Major roads between Luanda and the provincial capitals are improving, but some road conditions remain poor while the infrastructure for pedestrians is lacking. Drunk-driving is also a problem. Other hazards include potholes, lack of or attention to traffic signals, erratic driving habits, excessive speed, pedestrians, and roaming animals. During the rainy season, November-April, roads and bridges, already in poor condition, can become impassable and landmines may become displaced and surface outside known mine fields.

When driving outside of Luanda on other than primary roads between major cities, a four-wheel-drive vehicle is useful. Secondary roads are often unpaved and nearly impassable. Major routes though are paved in most areas and feature gas stations and other roadside services.

Traffic Laws: You will need an international driving permit or Angolan license to drive. You may use a U.S. license for one month.

Checkpoints: Both inside and around Luanda, police set up spontaneous roadblocks to check for vehicle documentation. They may also solicit bribes or request immediate payment of "fines" for alleged minor infractions. Police and military officials are sometimes undisciplined and their authority should not be challenged.

**Accidents: **In the event of an automobile accident, remain at the scene until the police arrive.

If a hostile mob forms or you feel your safety is in danger, leave the scene and proceed directly to the nearest police station to report the incident. Do not stop at the scene of an accident where people have gathered, as mobs can develop quickly.

Landmines: Use caution in remote areas or off main roads outside of Luanda. Landmines are most common in the southern provinces. The provinces of Benguela, Bie, Cubango, Cuando, Huambo, and Huila, have a higher number of landmines than other areas of the country.

Aviation Safety Oversight: As there is no direct commercial air service to the United States by carriers registered in Angola, the U.S. Federal Aviation Administration (FAA) has not assessed the government of Angola’s Civil Aviation Authority for compliance with International Civil Aviation Organization (ICAO) aviation safety standards. Further information may be found on the FAA’s safety assessment page.