Learn more about Burma Travel Health Insurance with an overview from the CDC and the US State Department. Here we cover Vaccines, Medicines and Insurance.

At AARDY we can’t recommend travel insurance enough. Whether you are just traveling a few hundred miles from home to see family, or traveling to the other side of the world, travel insurance should be considered an essential part of your holiday packing. The hope is that you won’t have to use your travel insurance, and that you’ll have a fun and enjoyable trip. The following advice should help you make the most of your trip to Burma.

Note: The military government changed the country’s name to "Myanmar" in 1989. The United States government continues to use the name “Burma” as do we in this article. 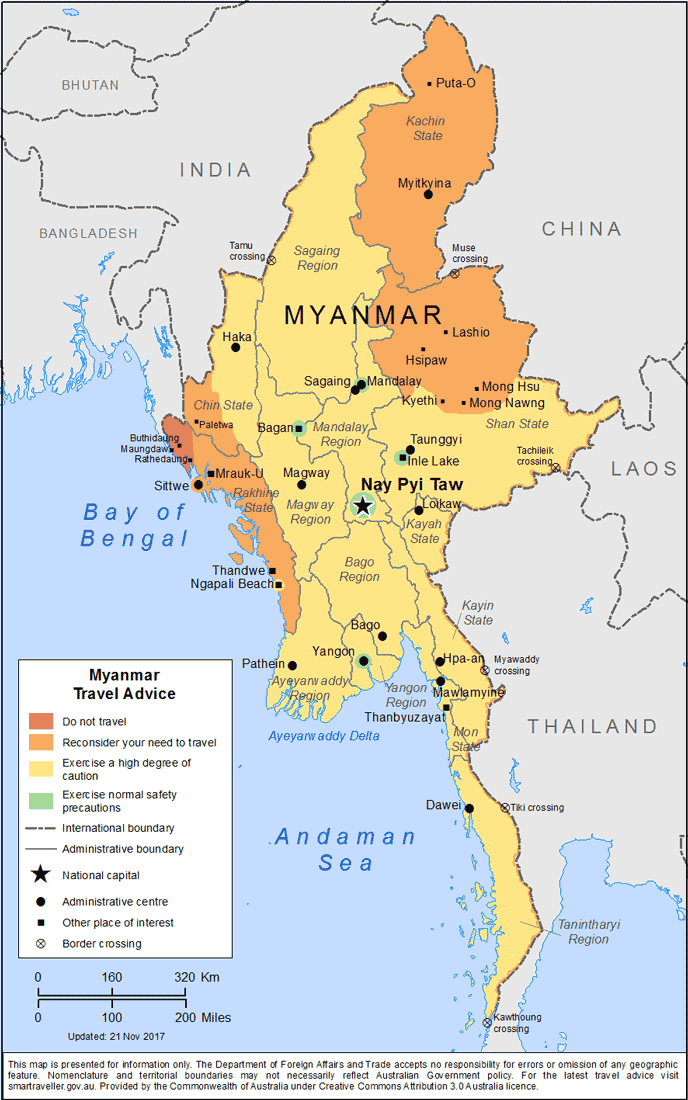 You should be up to date on routine vaccinations while traveling to any destination. Some vaccines may also be required for travel.

Check the vaccines and medicines list and visit your doctor (ideally, 4-6 weeks) before your trip to get vaccines or medicines you may need.

Make sure you are up-to-date on routine vaccines before every trip. These vaccines include measles-mumps-rubella (MMR) vaccine, diphtheria-tetanus-pertussis vaccine, varicella (chickenpox) vaccine, polio vaccine, and your yearly flu shot.

Get travel vaccines and medicines because there is a risk of these diseases in the country you are visiting.

CDC recommends this vaccine because you can get hepatitis A through contaminated food or water in Burma, regardless of where you are eating or staying.

You can get typhoid through contaminated food or water in Burma. CDC recommends this vaccine for most travelers, especially if you are staying with friends or relatives, visiting smaller cities or rural areas, or if you are an adventurous eater.

Ask your doctor what vaccines and medicines you need based on where you are going, how long you are staying, what you will be doing, and if you are traveling from a country other than the US.

You can get hepatitis B through sexual contact, contaminated needles, and blood products, so CDC recommends this vaccine if you might have sex with a new partner, get a tattoo or piercing, or have any medical procedures.

You may need this vaccine if your trip will last more than a month, depending on where you are going in Burma and what time of year you are traveling. You should also consider this vaccine if you plan to visit rural areas in Burma or will be spending a lot of time outdoors, even for trips shorter than a month. Your doctor can help you decide if this vaccine is right for you based on your travel plans. See more in-depth information on Japanese Encephalitis in Burma

You will need to take prescription medicine before, during, and after your trip to prevent malaria. Your doctor can help you decide which medicine is right for you, and also talk to you about other steps you can take to prevent malaria. See more detailed information about malaria in Burma.

Rabies can be found in dogs, bats, and other mammals in Burma, so CDC recommends this vaccine for the following groups:

Note: Zika is a risk in Burma. Zika infection during pregnancy can cause serious birth defects. Therefore, pregnant women should not travel to Burma. Partners of pregnant women and couples planning pregnancy should know the possible risks to pregnancy and take preventative steps (more information)

For more information on recommendations and requirements, see yellow fever recommendations and requirements for Burma. Your doctor can help you decide if this vaccine is right for you based on your travel plans. Note: Yellow fever vaccine availability in the United States is currently limited. If you need to be vaccinated before your trip, you may need to travel some distance and schedule your appointment well in advance. Find the clinic nearest you. Note: Zika is a risk in Burma. Zika infection during pregnancy can cause serious birth defects. Therefore, pregnant women should not travel to Burma. Partners of pregnant women and couples planning pregnancy should know the possible risks to pregnancy and take preventative steps (more information)

Learn actions you can take to stay healthy and safe on your trip. Vaccines cannot protect you from many diseases in Burma, so your behaviors are important.

Talk with your doctor about taking prescription or over-the-counter drugs with you on your trip in case you get sick.

What type of insect repellent should I use?