Learn more about Scotland travel health insurance with an overview from both CDC and the US State Department. We cover vaccines, medicines, and insurance. At AARDY we look at a variety of different information sources in order to get a better view of a country and its health systems. 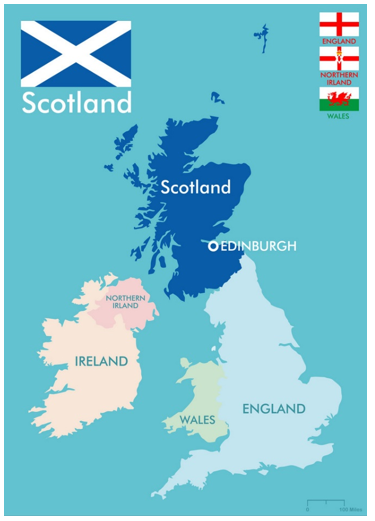 The name United Kingdom refers to the union of what were once four separate countries: England, Scotland, Wales and Ireland (though most of Ireland is now independent).  The UK's full name is the United Kingdom of Great Britain and Northern Ireland. Note that the "countries" of the UK are not independent. They form a part of the union, The UK.

England: It' a nation within the UK. The demographics of England is dominated by English people, with English being the primary language. The capital is London

Wales: Wales is another country which neighbors England. However, the majority of population is ethnically Welsh, with Welsh being the main language. The capital is Cardiff

Scotland: Another country which is north of England, bordering it as well as a part of Ireland(Northern Ireland). The major ethnic group are the Scots.The cultures of England and Scotland differ vastly. The capital is Edinburgh and the main languages are Ulster Scots, Scottish and English.

The Island of Ireland: Ireland is actually divided into 2 separate countries. One is Independent and the other a part of a Union.

Northern Ireland: is a small region wiht a  sea border to Scotland. The capital is Belfast. The languages are Irish and English. It is a part of the UK

Republic of Ireland: This is a separate country. It occupies most of the island of Ireland. The capital is Dublin and the major languages are Irish, Ulster and English.  The major ethnic group, unsurprisingly is Irish.

Great Britain comprises only England, Scotland and Wales. It gets it's name from The British Isles. The British Isles is a geographical term which includes two large islands, Great Britain and Ireland, and 5,000 small islands, most notably the Isle of Man which has its own parliament and laws, but still part of the UK

Great Britain means only England and Wales. They are called "Great" so a to distinguish itself from Brittany in France.

Scotland is a land of mountain wildernesses such as the Cairngorms and Northwest Highlands, interspersed with glacial glens (valleys) and lochs (lakes). Its major cities are Edinburgh, the capital, with its iconic hilltop castle, and Glasgow, famed for its vibrant cultural scene. Scotland is also famous for golf, the game first played at the Old Course at St Andrews in the 1400s.

You should be up to date on routine vaccinations while traveling to any destination. Some vaccines may also be required for travel.

Make sure you are up to date on routine vaccines before every trip. These vaccines include the measles-mumps-rubella (MMR) vaccine, diphtheria-tetanus-pertussis vaccine, varicella (chickenpox) vaccine, polio vaccine, and your yearly flu shot.

Ask your doctor what vaccines and medicines you need based on where you are going, how long you are staying, what you will be doing, and if you are traveling from a country other than the US.

Hepatitis A outbreaks occur throughout the world and sometimes in countries with a low risk for hepatitis A (including the US). You can get hepatitis A through contaminated food or water in the United Kingdom, so talk to your doctor to see if the hepatitis A vaccine is right for you.

You can get hepatitis B through sexual contact, contaminated needles, and blood products, so CDC recommends this vaccine if you might have sex with a new partner, get a tattoo or piercing, or have any medical procedures.

Rabies is present in bats in Scotland and the United Kingdom. However, it is not a major risk to most travelers. CDC recommends rabies vaccine for only these groups:

While medical services are widely available, free medical care under the National Health System (NHS) is allowed only for UK and Scottish residents, certain EU nationals, and some visa holders.

An NHS surcharge is assessed on certain visa applicants at the time of application. Tourists and short-term visitors will not be assessed the surcharge, but will be charged 150 percent of the cost of any medical treatment they receive from the NHS. Unpaid balances of £1,000 or more can result in being barred from return to the United Kingdom.

Carry **prescription medication **in its original packaging, along with your doctor’s prescription. Certain prescriptions available in the United States are classed as **narcotics **in Scotland and the United Kingdom and are not available.

**Vaccinations: **Be up to date on all vaccinations recommended by the U.S. Centers for Disease Control and Prevention.

**Vaccinations: **Be up to date on all vaccinations recommended by the U.S. Centers for Disease Control and Prevention.